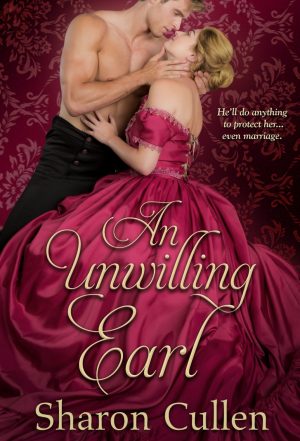 One of the hardest things for me about reviewing books it being honest when I don’t love something… And I didn’t love this one. I didn’t hate it though.

The murder/crime element of this book had me much more hooked than the romance. I was definitely into the grisly moments even though they sort of took me by surprise. (Who’s a creep? *raises hand*) The gruesome details here aren’t your typical fodder for a historical romance but I thought it was well done and well researched. Sharon Cullen did a good job with that side of this unique story.

I guess the romance side though, the reason I read it, didn’t hit all the right notes for me. In fairness, I just finished Lisa Kleypa’s Devils Daughter and that’s a hard act to follow for anyone else. So that could have been a factor. I felt that marriage as an obvious solution seemed unreasonable in that Jacob could just as easily helped Charlotte leave the country, as was her original plan.

All that said, I liked this book enough to read more from Sharon Cullen. She has a lot of four- and five-star ratings on Goodreads and that’s more than enough reason for me to try more from her. An Unwilling Earl releases on March 25, 2019. Thank you, Netgalley, for the chance to read an advanced copy.

Amateur crime-solver, Jacob Ashland never expected to inherit an earldom. Now that he has, he is expected to remarry and produce an heir. Losing his first wife left him heartbroken and he hesitant to marry again, but when a fascinating young woman lands unexpectedly in his life he offers her marriage in order to keep her safe. In name only…

Charlotte Morris is sitting on a deadly secret. Several women have been found brutally murdered and she thinks she knows who is doing the killing. Fearing for her own life, she runs from her own home and straight into Jacob Ashand’s life. Somewhat reluctantly she accepts his marriage proposal. But soon it’s clear that she’s falling in love with him…

Review: Would I Lie to the Duke by Eva Leigh