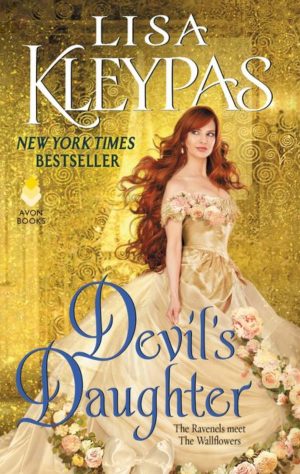 It’s been a few hours since I finished Devil’s Daughter but I’m still smiling. I feel like I just spent a perfect girls weekend with some friends I hadn’t seen in far too long.

Devil’s Daughter plops us right in the middle of Evie and Sebastian’s happily ever after. (Devil in Winter) While this isn’t the first book in The Ravenels series where we catch up with Evie and Sebastian, it is certainly, thus far, the one where we’ve been able to spend this much time with them and the rest of the original Wallflower gang. I absolutely loooved it. (Wallflowers fangirl here)

I can see how some might read Devil’s Daughter and come away thinking that Phoebe’s father, Sebastian, stole show in this book. And you know what, he did a little bit. But I didn’t mind at all. LK almost plays a bit with the historical romance formula so to speak in this book but it worked for me. Because Phoebe and West still have a gorgeous love story. It’s nuanced and complex and entirely it’s own.

Lisa Kleypas writes parental love so beautifully and that’s a major thematic element driving Devil’s Daughter. As far as LK novels go, Devil’s Daughter is a little more sweet than heat but, believe me, Sebastian as a father is just mop me up off the floor hot. And the way West falls in love not just with Phoebe but also her little boys? Also hot. But don’t be worried, the steamy moments in this book do not disappoint.

I have to say it though. With regards to the way West was so insistent that his past made him unworthy of Phoebe, I reeeally kept waiting for her to be like…have you met my father?

Trying to wrap this up… As always I am in awe of Lisa Kleypas’s talent. As always, her characters are rich and practically real people jumping off her pages. Her meticulous research and her skill has a writer transport you completely and there is a greater purpose for every single scene she writes. And she’s funny. So funny. Keep your eye out for the literary phenomenon about to be unleashed by Daisy, the heroine of Scandal in Spring. You’re going to love it.

When Phoebe, Lady Clare, and her two small children arrive at her brother’s wedding, she meets an attractive and charming stranger. Lo and behold, he turns out to be the very fiend who bullied Phoebe’s late husband when they were children in boarding school. She was determined to hate him forever but instead she finds herself falling in love with the man he’s worked to become…

West Ravenel is running from a shameful past and, no matter how far he’s come from his days of debauchery, he knows he could never be worthy of a woman like Phoebe. But that doesn’t stop him from wanting her. Or from loving her and her precious children…

West is determined to resist her. But Phoebe is coming into her own. And she won’t give up on him without a fight.

Review: The Duke Buys a Bride by Sophie Jordan

Review: The Bachelor by Sabrina Jeffries

Review: A Duke by Default by Alyssa Cole