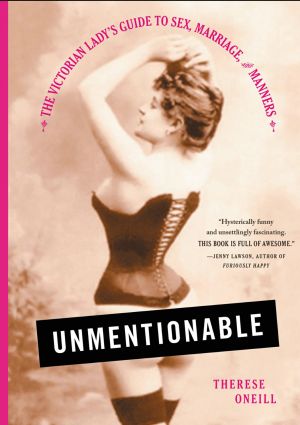 Unmentionable: The Victorian Lady’s Guide to Sex, Marriage, and Manners by Therese Oneill

It was like a carriage accident and I couldn’t look a way.

As a person who loves history and voraciously tears through fiction set in the past…I won’t lie. I’ve been curious about…things. Like everyday human things. And this book? It has the answers to all the things. And I mean. ALL. THE. THINGS.

Therese Oneill invites you on a journey back in time, girls. An embarrassing, disgusting and infuriating journey back in time. As she welcomes you to the 19th century you might quickly find yourself begging to turn the Delorean back around… Forget the about Heathcliff and Cathy frolicking across the romantic moors and and start thinking more about how and where the two of them are going to be able to take a dump. Behold a world without toilet paper. Without underwear. And without feminine hygiene products. A world where even the fancy-ish people like Elizabeth and Mr. Darcy rarely bathe and there’s no such thing as deodorant. Sit back, relax, and let Therese Oneill get you “clean”, dressed, married and laid in fantastic Victorian style. 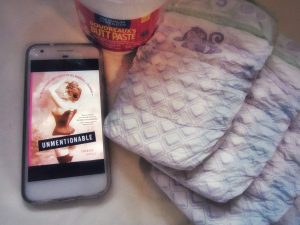 This book is laugh-out-loud funny and also grab-the-garbage can gross. It’s light and easy to follow and absolutely FASCINATING. With glorious sarcasm and irreverence, Therese exposes the past for the deadly, smelly, misogynistic hellhole it truly was.

On a more serious note, it sucks how much of the misogyny that dominated the 19th century still echoes in women’s lives today. Things like…feeling as if men are the standard and women are the deviation. Or being humiliated and ashamed of your own basic female reproductive system and hormones. And how we’re somehow supposed to be pure as the driven snow and also a sex goddess. But, I mean, at least now if your husband cheats and infects you with an STD you can divorce his ass…

We know something these men seemingly did not, cherie. We know that probably every woman who ever existed has had a day or twenty that could be described in those terms. Except for choking on your own internal flatulence; that would be quite an ordeal, worthy of medical study. Otherwise, what he’s describing is just a lousy, hormonal weekend.

This is a must read for any history buff and for any fan of historical fiction. Though, as a historical romance devotee, I am a little traumatized. A question to help you cope: If everyone smells then does anyone really smell?

Annnyway, check this one out! And then check out Therese Oneill’s next one, Ungovernable: The Victorian Parent’s Guide to Raising Flawless Children, which comes out in April next year.

Review: An Heiress to Remember by Maya Rodale

Review: A Duke, The Lady, and a Baby by Vanessa Riley