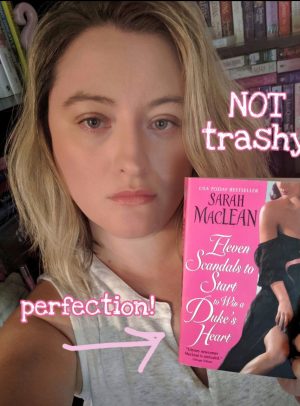 How Romance Novels Carried Me Through Infertility: Take 2

If you google my name you might find an article called Trashy Romance Novels Kind of Saved My Marriage. So I need you to find this post too.

Yes. There is definitely a story here.

Okay. A little over a year ago I sat down and wrote about how romance novels carried me through secondary infertility. And about how, without romance novels, I never would’ve survived that period of my life. Then, feeling uncharacteristically brave, I took a risk and submitted what I’d written to Scary Mommy. And they liked it. They wanted to publish it.

Cue the spazzing. I was excited, to say the very least. Sure, sure, they weren’t paying me or anything but, dude, I’d never been “published” before. It was a big deal to me. This was such a personal piece of writing. So, fingers flailing, I frantically checked all their required permission boxes so that my article could appear on their website. And I told everyone I knew to watch for it to show up in their timelines.

Unsurprisingly, on the day my piece was set to go live I sat with bated breath, hitting that refresh button like a fiend. Like an anxious maniac. Until there it was. And then…that painfully excited feeling I’d reveled in for weeks fizzled out like a dying sparkler.

They had changed my title.

Let me be clear. I’m quite sure I gave them permission to change it. No doubt it was probably one of those boxes I’d furiously clicked in my ‘I can’t believe they liked what I wrote’ euphoria. But my original title? How Romance Novels Carried Me Through Infertility. And the new one? Trashy Romance Novels Kind Of Saved My Marriage.

I don’t know why it took me by such surprise. I mean, OBVIOUSLY, I’ve been defending romance novels from this lame ass characterization for years. Anyone who lives and breathes this genre has done the same at some point. But, nonetheless, I was not expecting that. That awful, stupid word. And my name, OMG MY NAME, was to be forever linked to that description…to a word I never did and never would use in association with romance novels.

Not to mention, I never once said that my marriage was in trouble…people can be broken and exhausted and heartbroken and still never once think about letting go of each other. But whatever. That’s a rant for another day…

But yeah.  I was deflated. Of course, I was still proud to see something so close to my heart shared on such a major platform. It was gratifying beyond words to see readers comment that what I’d written resonated with them and, in a small way, helped them. I’m proud of that.

To this day, that title just kills me.

So I want to be very clear about what I, the author of that article with that title, actually believe. And it’s this: sexuality and, in particular, ENTHUSIASTIC FEMALE SEXUALITY, is not trashy.

There is one reason, and one reason only, that this genre written (historically) by women and for women about women enjoying sex is so routinely denigrated.

It starts with an M and ends with isogyny.

*eye-roll to beat all eye-rolls*

In fairness, I still have a lot of respect for Scary Mommy. From their empowering and supportive resources for women, to their commitment to speaking out loudly against misogyny, xenophobia, racism, and homophobia, SM is one of the good guys in my opinion. Or at least they’re trying to be… but that’s just it, isn’t it?

I’m not giving them a pass. I am just pointing out that these issues are systemic. These damaging messages (women falling in love and enjoying empowered sex = trash) are internalized. So much so that it becomes part our accepted lexicon.

And thus, that’s how someone who likely shares most of my values thought that calling romance novels trashy was okay.

But it’s not okay.

Romance novels carried me through infertility. Mentally, emotionally, intellectually, sexually, I could not have survived infertility without romance novels. They saved me. But the truth is that they’ve been saving me, over and over again, in so many ways, since I was twelve years old.

Trash could never do that. Trash doesn’t save people. It doesn’t light people up from the inside out.

Love does that. And so do romance novels.

I Still Want Myself

Buy the Stupid Shirt: A Self Care Story

If You’re Not Already Reading Romance: The Bride Test by Helen Hoang