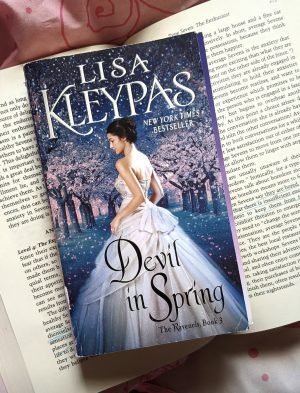 Happily Ever EnneAgram: Devil in Spring by Lisa Kleypas

“I keep veering this way and that, to make certain I’m not missing anything. So whenever I set out for a new place, I always end up back when I started.”

Pandora is probably one of LK’s more complex heroines, in my opinion. I had to really think about where she would fall on the Enneagram. While I think she has major ‘quirky individual’ type four traits, on the basis of her motivations, I’m going to say…she’s a seven. Sevens crave constant  stimulation and have almost no patience for boredom. Think about Pandora sitting on the perimeters of London’s ballrooms, bored and miserable. However, a seven’s desperation to avoid boredom is actually rooted in a desperation to avoid feeling negative emotions. You can’t feel pain when your mind is occupied. And there is a lot of pain in Pandora’s past.

But a seven is an absolute force. Their minds are bright and agile and able to quickly sift through information and run with it. They’re fast learners with boundless energy. Of course, with a mind so nimbly hopping from possibility to possibility, sevens can have a tendency to be absent-minded and scattered. Gabriel notices this when Pandora is walking with his nephew on the beach when she’s distracted by random objects and the little boy has to tug her by the hand to get her back on task.

Commitment is hard for a seven. Motivated to maintain her freedom and to avoid restrictions on her happiness, despite her feelings for Gabriel, Pandora is terrified to be trapped and kept from what she knows will make her happy: independence and her board game.

“For the rest of his life, he would feel a stab of dread every time she walked out the door, leaving him there with his heart wide open.”

Gabriel is a six. Unlike his “Uncle” Marcus who strives for “perfection” for perfection’s sake, Gabriel’s motivation to meet expectations are rooted in his need for security. Both for himself and for those he loves. Fortunately for Gabriel, he was born into the perfect family for an “anxious” six and that support is why he grew to be steady and confident.

Gabriel manages his anxiety for Pandora’s safety pretty well until she is nearly killed. But after that his sixness explodes into action. He’s rocked. And it’s fair. Which is why the Rx Dr. G writes, advising Pandora to love him back to calmness, so that he can begin to relax and feel safe again.

I love this couple. They’re imperfect people who see each other and  love each other. And what more can anyone ask for?