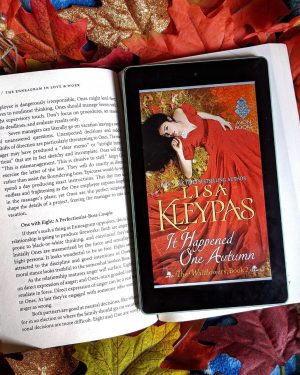 Happily Ever EnneAgram: It Happened One Autumn by Lisa Kleypas

Marcus Westcliff and Lilian and Bowman: a lit match tossed into a barrel of combustible liquid. And, in large part, that’s because they are a One and a Eight on the Enneagram. This is one of my very favorite Kleypas couples, but brace yourself. Because. . . Ka. Boom.

“Livia and her sister, Aline, had been in awe of their older brother, whose constant striving for excellence led him to get the highest marks in school, to break all records in his chosen sports, and to judge himself far more harshly that anyone else ever could.”

Marcus Westcliff is a one. A BIG one. Ones don’t just follow the rules, they write them and they often enforce them. Marcus is committed to the highest-standards in all things but most especially in HIMSELF. He’s orderly. He’s structured. He’s principled. For Marcus, there is a Right and a Wrong and the inner critic inside him will rarely allow him to compromise. Unlike a type three, who is also compelled to be “the best”, Marcus is not motivated by a need for achievement or validation but rather for perfection. As a type one, sometimes called ‘The Reformer’, he also believes that the world can be made perfect as well. Before you hate him though, there is NO ONE he holds to a higher standard than himself and deep down he’s very lonely. Lillian Bowman is the last woman he could imagine himself with but she’s also everything he’s ever wanted. Because she’s everything he’s never allowed himself to be. Free.

“Lillian knew herself to be a sharp-tongued girl with a fortress of defenses between her and the rest of the world . . . She was intensely loyal to the small circle of people in her sphere. . .”

If Marcus is ice, then Lillian is fire. As a type eight, she’s nearly his opposite in every way. With a will of iron, she never backs down from a confrontation and she is fiercely, recklessly loyal. And rules? Lillian doesn’t do rules. A game a rounders with the servants even though it’s “not done”? Well, screw that. As an eight, her primary motivation is to never allow herself to be controlled or manipulated by the outside world. This is ultimately what makes the strictures of ‘English High Society’ so difficult for her. It’s a system predicated on conformity and Lillian just can’t conform. Where Marcus believes that if he can only control everything just enough that he and those he loves will be safe, Lillian believes that if nothing can ever control her, nothing can ever hurt her. Uh oh. How’s that going to work?

It does. Because Lillian comes to understand that ceding control to someone who loves her, allowing someone worthy to take care of her sometimes, is the key to her true freedom and happiness. And Marcus comes to see that letting go of his rigid death-grip on control and letting the vitality and joy that is Lillian to take him where it will is that which brings him love and peace at last. *dreamy sigh*

Aaaaaand now I want to read this book again. Happy Ever EnneAgram!