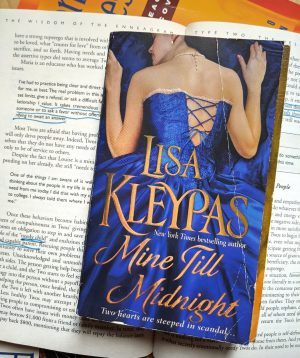 Happily Ever EnnAgram: Mine Till Midnight by Lisa Kleypas

Cam and Amelia. Amelia and Cam. Nine and Two. Two and Nine.

“‘I believe in magic and mystery, and dreams that reveal the future. And I believe some things are written in the stars. . .or even in the palm of your hand.‘”

Cam Rohan is a nine or ‘The Peacemaker’. A nine is someone deeply aware of and connected to the cosmos and larger mystery of the universe. They are often spiritual seekers but they also are very good with people. Naturally diplomatic and empathetic, they are particularly skilled in bringing people together and healing conflicts. You can see this in Cam in the way he seeps into the Hathaway family and eventually helps them repair fraying bonds. A type nine doesn’t like conflict and will go to great lengths to avoid them, particularly within themselves. Though a nine has access to the power of an eight and the charisma of a seven, nines can sometimes become complacent in their efforts to maintain inner harmony. They get stuck and minimize things that upset them. This is (partially) why Cam, despite is desire to return to his Romani traditions, has stuck around at Jenner’s Club for as long as he has. At his best, Cam is viscerally alive and present to himself and in his relationships. At his worst he can become disengaged, lost in his own mind, and indifferent.

“She went to check on her siblings. Starting with her brother.“

Amelia Hathaway is a two. A great, big, flaming two. A two, sometimes called ‘The Helper’, loves hard and unconditionally but she is also very likely to ignore her own needs in order to sacrifice for others. Her key motivation is to be needed. And, because of that, she often steps in to to take care of others, pulling weight that isn’t her own, even when she really shouldn’t. Despite her natural inclination to nurture, deep down, as a two, Amelia wants to be appreciated and seen for all that she does for her family. Amelia Hathaway is the de facto Matriarch of her brother and sisters and her every move is devoted solely to their collective well-being. Until Cam. When she’s healthy, she is loving, naturally nurturing, generous and thoughtful. When she is unhealthy she can be prideful, manipulative and resentful.

Through Amelia, Cam learns what it means to commit to something tangible and real. To stay. And through Cam, Amelia comes to accept the limits of her power in the world, to honor herself, and to let go. In short, they’re friggin’ perfect for each other. Happily Ever EnneAgram.

**I just want to be clear that I definitely don’t take the Enneagram lightly and, as much fun as these posts are for me, I have sincerely adopted what I’ve learned about the Enneagram into my own contemplative, spiritual practices. I take it seriously. And, to be honest, analyzing characters this way HELPS me understand the nine types better and to grow in my understanding.

**Another Kleypas Super Couple because, as it turns out, hers are the characters I’ve reread the most and the ones I know the best. So I might be a bit Kleypas heavy here for a while, but, I mean, she’s a legend so. . . I’m betting no one will mind.