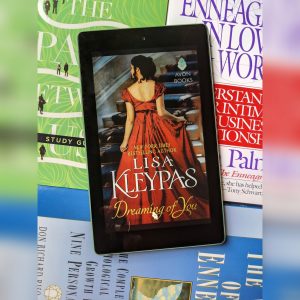 Happily Ever EnneAgram: Dreaming of You by Lisa Kleypas

Hi, friends. I’m trying a thing. I think I’ve found the perfect way to incorporate what I’ve learned about the Enneagram here in a way that’s interesting and fun. Presenting. . . Happily Ever EnneAgram! Wherein I shall be typing our favorites romance heroes and heroines according where I think they fall on the Enneagram. *squeals and claps* Hopefully people find this fun and I will keep doing it. . .or maybe I will either way just because I’m a raging nerd.

Sidenote: The first rule of the Enneagram is DO NOT TYPE OTHER PEOPLE. Identifying one’s type is a very personal and even sacred thing. It’s not cool to lable someone with a type you *think* they are without them having a chance to come to that knowledge on their own. You might have a pretty good idea about someone. . .but still, keep it to yourself unless they ask. However, given that Derek Craven and Sara Fielding are fictional…I think we’re safe.

I chose Dreaming of You first because I know these characters the best. I’ve read and reread this book. . .8 million times? So let’s go!

Alright, the man himself. The Derek Craven. All hail the King. Derek is an Enneagram 8. Sometimes called ‘The Challenger’. His most basic fear is the possibility of being controlled or harmed by anyone outside himself. What he wants most is to be the master of his own life and destiny. To never, ever be at the mercy of the world or external forces. He is self-reliant. He is imposing. He is the boss. This is why he does every thing he possibly can to bury his feelings for Sara. This is why it actually *angers* him initially that she becomes to vital to his happiness and well-being. Anger is the easiest emotion for an 8 to reach for but, as we know, beneath anger is usually fear. Derek is afraid of exposing the vulnerable sides of himself and his 8-ness is his emotional armor. But as an 8 he’s also charismatic. He’s larger than life. When he walks into a room, the very energy of that space reconfigures itself around him. An 8 also has an innate sense of justice and fights just as hard for the oppressed as they do for themselves. An Enneagram 8 is your basic, glorious, delicious romance Alpha. *swoons*

As for Sara, she is an Enneagram 5. Also known as ‘The Investigator’. Perceptive. Curious. Secretive. She is an observer. She finds her sense of power through the acquisition of knowledge. Her fascination with the unusual, overlooked and even inappropriate, such as the world of prostitution and gambling, mark her as eccentric to those who love her. But this is how she feels she contributes to her world. She never stops asking questions. She never stops taking notes and cataloging information. Once she’s confident that she has all the knowledge she needs, she will present it to others. As an author, Sara does this in the form of her novels. For a 5 though, this preoccupation with knowing and understanding can often distract them from what isn’t right in their lives. For Sara this would be her boring, safe relationship with Perry Kingswood and her deep longing for adventure. Deep down Sara knows she’s standing on the sidelines of life and she wants more for herself. Enter Derek. It’s Derek who inspires her to push herself…to take a risk and live. Because 5s are so cerebral sometimes they can appear cold and unfeeling despite their ability to feel strongly. Sara though, is a 5 with a 4 wing and this is why she’s more in touch with her emotions than other 5s. But even still she is still a bit of a challenge for Derek. He wants inside her head and to know what she’s thinking and she makes him work for it. He loves that.