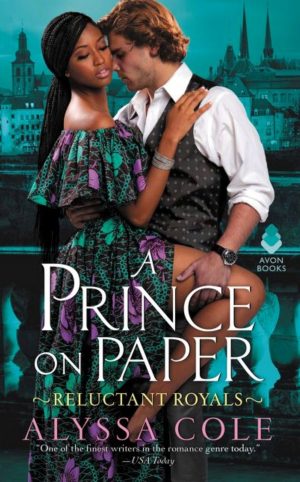 Review: A Prince on Paper by Alyssa Cole

Review: A Prince on Paper by Alyssa Cole

I completely freaked out when I got the notification that I’d been approved for an ARC of A Prince on Paper. I have been dying for Johan’s story because OF COURSE there had to be  a tortured soul longing for love underneath all that playboy prince swagger…(Gimme!)

But Nya. Nya was my favorite part of this story. Sometimes a great heroine is a woman who from page one is lit up from the inside with her unwavering confidence. But sometimes a great heroine is a bent-but-not-broken woman who learns to stand in her own strength despite her fears and insecurities. That’s Nya. And, let’s be real, that’s the kind of heroine most of us relate to the most.

Johan and Nya are very heart-squeezy together. They’re both exactly what the other one needs to grow and they have maaarvelous bedroom chemistry too. Alyssa Cole writes fully human characters with emotional depth and still keeps everything light and fun. A Prince on Paper just might be my favorite in the Reluctant Royals series. Loved this book!

However, if you haven’t read the previous books in this series then I would suggest you do that before jumping into this one. It’s a stand-alone but I think you’ll enjoy it more having read the others first. They’re all great! This book is set to release on April 30, 2019. But you can preorder it now, and you SHOULD, because A Prince on Paper is wonderful.

Thank you, Netgalley for allowing me to read an advanced copy.

After her father’s treason, Nya Jerami runs away from her old life to try her luck in NYC. But it turns out life in the big city isn’t exactly what she’d thought it would be. Nervous about returning home to Thesolo for her cousin’s royal wedding, Nya just wants to curl up and take nap in the bedroom of the royal plane…but someone is already in her bed. Someone very hot and very annoying…Prince Johan von Braustein. And he wants to cuddle…

Johan von Braustein is everyone’s favorite playboy royal celebrity. Little does Nya know though, the step-son to the King of Liechtienbourg uses his party-boy persona as a shield for his younger brother…and for his own emotions. But the truth is that Johan is actually a tender-hearted guy. And he has always longed for Nya…

When trouble in Liechtienbourg has Nya posing as Johan’s fake-fiance, both of them are forced to lay their true feelings on the table. Maybe their fake relationship is very much for real…

Review: When a Rogue Meets His Match by Elizabeth Hoyt

Review: For the Duke’s Eyes Only by Lenora Bell