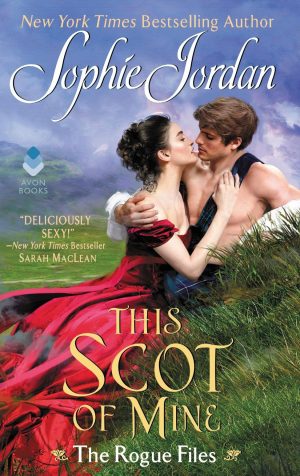 Review: This Scot of Mine by Sophie Jordan

Review: This Scot of Mine by Sophie Jordan

This Scot of Mine is just plain yummy. I hardly know where to start. Sophie Jordan writes great romance. Full stop. Any fan of Scottish romance  in general likely won’t be disappointed with this book…classic hulking Highlander and the exasperating Sassenach he loves? Check and check. Great characters. Great dialogue. Great chemistry. But I think what totally made this story for me was the concept of this curse…

I really loved how SJ was never completely clear as to whether or not the reader was supposed to believe the curse was real or if it was all in the character’s heads. One could make an argument either way.  But, more compelling to me…does it even matter? I kept thinking about this from the perspective of people who suffer from anxiety (I do) and the way fear and fixation wreak so such havoc…rational or irrational. Whether the curse was real or not seemed less important than how fear and anxiety affected the behavior of/relationships between these characters. There’s a point in the book where Hunt realizes that he’s been so consumed with fearing his curse that he’s forgotten to worry about Clara…or, a little more broadly, he’s forgotten that anything can happen to anyone at anytime. And that everyone has to learn to live and love in that uncomfortable space.

This Scot of Mine is full of sexy, fun romance but it’s very thought-provoking too. Do yourself a favor and pre-order it! Or go reserve it at your library. (hooray for libraries!) This Scot of Mine releases on March 12th and is part of Sophie Jordan’s The Rogue Files series. Thank you Edelweiss and Avon for allowing me to read an advanced copy.

In order to force her cretin of a fiance to cry off and break their engagement, Lady Clara Autenberry tells him a HUGE, life-wrecking lie. She tells him that she is carrying another man’s child. (That’ll do it.) Summarily ruined, Clara is shipped off to her brother’s estate in Scotland where she’s to live the rest of her life as everyone’s favorite spinster aunt. But enter Hunt MacLarin…

For all of his life, Laird Hunt MacLarin has lived under the shadow of an ancient curse. Like his ancestors before him, he believes he’s fated to die before the birth of his firstborn. But when his friend’s beautiful sister shows up already “pregnant”? Hunt thinks he’s found the perfect way to get around the curse…

But, of course, Clara’s not pregnant. But neither does Clara believe in curses and she’s certain that Hunt will eventually come around. Then things begin to happen…and Clara starts to wonder if all this Highland superstition might be more ominous than she first thought…but by then it’s too late. By then she is pregnant. And she’s already in love with her husband.

Review: Written in the Stars by Alexandria Bellefleur

Review: The Governess by Christi Caldwell