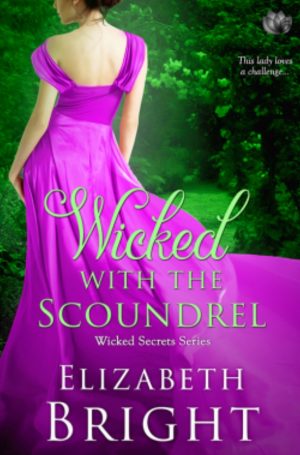 Having never read anything by Elizabeth Bright before, I went into Wicked With The Scoundrel without any expectations whatsoever. But every so often you try a new author and hit the jackpot.

This is pretty high praise coming from me, but I found Bright’s writing style to be very reminiscent of Eloisa James’s earlier books. Think the Duchess in Love series or the Essex Sisters. Not necessarily in content but in tone. The narrator’s voice was ever-so-slightly distant from the action and it allowed for such a delightful infusion of irony.

However, it did take me a minute there to pick up on that deliberate irony. Which is why it also took me a few chapters to take a liking to Claire. Some of her behavior is kind of ridiculous. She’s naive and reckless and spoiled…and yet damn if she’s not also adorable. It was smooth sailing once I realized that I was supposed to find Claire a little over-the-top silly. And, yes, she is silly. But she is absolutely ONE-THOUSAND percent herself. Ultimately, I loved her.

As for Colin…he surprised me too. There were some true moments of vulnerability and honestly from Colin that went deeper than romance. Fear of exposure. Fear of loss. He nearly ruins his relationship with Claire via his desperation to keep her in a bubble, free from harm. But he learns that acting on that desperation is actually, deep-down…selfish. Heavy stuff but I was totally there for it.

Wicked With The Scoundrel releases on February 11th and is book three of a series called Wicked Secrets. I will most definitely be backtracking and reading the first two books as well. I was very impressed with this one! It’s available for pre-order now and only $3.99. So…yay! Thank you Netgalley for the chance to read an advanced copy.

Colin Smith, treasure-hunting adventurer and bastard son of a viscount, is back in England…much to his dismay. There’s nothing he loathes more than the rich, hypocrites of his father’s class. So as soon as he can sell off a few trinkets, make some money and say a quick hello to his poor mother, he’s getting the hell of the country again.

Except Lady Claire Harrison, the spoiled but lovable daughter of a wealthy marquess, rather abruptly falls in love with him. Colin wants nothing to do with her but Claire is formidable. She’s ridiculously intelligent with an eidetic memory and the word “no” isn’t in her vocabulary. She is determined to win him over and what better way to tempt him to her side than by enlisting his help in finding a famous local treasure…the Cleopatra Emerald. 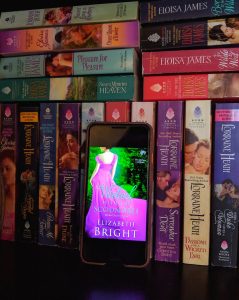 Review: Born To Be Wilde by Eloisa James

Review: How to Forget a Duke by Vivienne Lorret