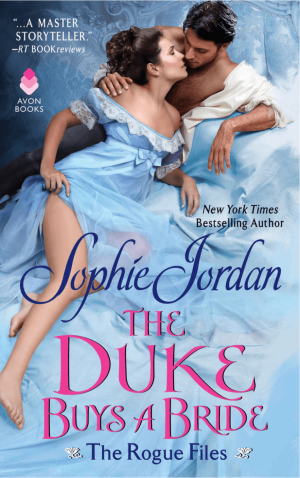 Review: The Duke Buys a Bride by Sophie Jordan

The Duke Buys a Bride by Sophie Jordan

When I first read the premise of this book I couldn’t help but wonder… Seriously? Wife selling? This was a thing? One swift google search later and, yep, this was very much a thing. Obviously. Romance authors are total bosses and they always do their research.

After a night of drunken dumbassery, Marcus Weatherton, the Duke of Autenberry, wakes up in a obscure country village with his face in a pile of crap. Actual crap. One might assume that Marcus, face full of excrement, would have been peak DISGUSTED for the day but then one would be wrong. Because, as he is riding out of town, he comes upon a mob of townsfolk gathered before a woman, a person, being sold at auction. Selfish, surly rake he may have been but even Marcus was appalled.

Alyse Bell had always known her marriage-in-name-only would be dissolved via a bride auction. Degrading? Yes. Humiliating? Very. But sadly, this was one of the only ways a person of her limited means had to legally dissolve a marriage. While such an auction had always been part the prearranged agreement with her “husband”, it was predicated on the certainty that her childhood friend would be there to purchase her and thus become her new husband. Except…he doesn’t show up. He’s not there. He lit out of town that morning like a cowardly little beotch. Basically, Alyse is screwed. But can you guess who buys her? Did you guess poopy-face Marcus? You’re right. It’s Marcus.

And so begins their sexy pseudo-honeymoon trip through the countryside. 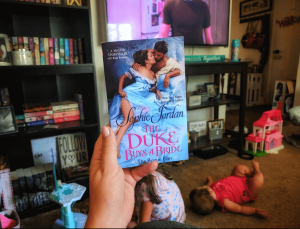 Personally, I love me a good ol’ fashioned traveling romance. I like the forced close proximity and the expedited intimacy between a couple when they are stuck together, alone, for an extended time period. Oh, there’s only one bed available at this inn? Whatever shall we do?

But what I liked best about The Duke Buys a Bride was Sophie Jordan’s obvious deep dive into b.s. invested waters of patriarchy and the female struggle for autonomy. Don’t get me wrong. This book has all the sexual tension and heart-squeezy feels a romance reader is looking for…but given that the story begins with the female protagonist  LITERALLY being sold it’s difficult not to ponder the social dynamics that allow for that kind of insanity.

Setting aside the fact that in the time Alyse and Marcus lived slavery was totally legal in the American South… (CAN OF WORMS EXPLODES)…it’s hard not to grind your teeth through the auction scene. There’s Alyse. Poor. But highly educated. And yet still, there she was, up on the block like livestock. No autonomy whatsoever. And not for lack of confidence or self-respect. She just. has. no. power. No money. No status. (No penis!) I really love how so many romance authors are choosing to confront historical and contemporary forms of female disenfranchisement these days. Yes, Sophie is using this as a fairly dramatic plot device BUT it’s more than that.

At the end of the book Marcus gives Alyse the first real choice of her life and that’s important. That’s what love does. Love lets you choose.

This is one worth reading, ladies. It’s actually part of a series called The Rouge Files and I need to grab the first two and catch up. Boo to reading a series out of order. This book stands alone but I think I would have enjoyed it more having read the first two books first. Lots of references to and involvement with previous characters.

Review: To Have and to Hoax by Martha