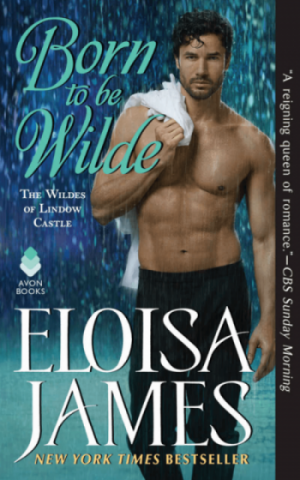 Review: Born To Be Wilde by Eloisa James

Born to be Wilde by Eloisa James

Oh, don’t mind me. I’m just over here in a Glass. Case. of Emotion.

Lavinia Gray… A dazzling jewel of Georgian Society, she is witty and beautiful and always exquisitely dressed. She’s turned down proposal after proposal and she’s never happened upon a man she could not charm…until she met Parth. Parth Sterling…He is practical, always steady, and (dare I say it?) a little closed-minded at times. He’s also a brilliant business man who has no patience for frivolousness and nonsense. And he deems Lavinia exactly that. Frivolousness and nonsense. The two of them are always bickering, though not without deliciously blatant sexual tension (duh).  Much to their mutual dismay (delight) they cannot avoid each other as Lavinia’s cousin is marrying into Parth’s eccentric family.

As it turns out, Lavinia’s mother has gotten her family into a rather crappy situation. The kind of crappy situation that can only be solved by a rich husband. So Lavinia gathers her courage and shows up at Parth’s bedroom door one night to ask him to marry her. And he says no! (the HUMANITY!) He does, however, much to Lavinia’s great mortification, offer to help her find a suitable husband. You can imagine how that goes… 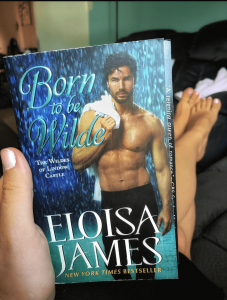 Okay, where to even begin with this book? Born to be Wilde had me emotional in a way a book hasn’t been able to do in a long time.  Eloisa James is particularly skilled at creating  such rich, realistic and vastly nuanced characters. Especially this time around. Full disclosure, I am a puddle of mush for any enemies to lovers story. But this one in particular actually made my chest physically ache.

With a natural, proufound gift for fashion and design, Lavinia would be the brains behind a fashion empire if she were alive today. To the world this is a vapid and lesser feminine interest but for Lavinia it’s a passion for beauty and lines and texture and color. However, she carries a lot of shame and accepts that she is as shallow and vapid as the world would have her believe. And what’s far worse, she believes that Parth, the only man she’s ever loved, believes this of her as well. That she’s less. She feels unworthy of him and even of love itself. It’s brutal and uncomfortable to watch her struggle but only because it’s so honest. It’s not often that a romance author dives this far into this VERY LEGITIMATE dynamic at play in just about every romantic relationship. Believing we are worthy of love? That we’re enough? We all have this problem sometimes, don’t we?

But, of course, Parth’s initial dismissal of Lavinia has nothing to do with her and everything to do with his own fear that he could never have her. That she was too far above him. I think Parth’s biggest problem (asset) is that he is just utterly incapable of bullshit. My husband is like this…get’s him in trouble all the time but it’s not without some merit. Parth’s journey brought him insight and greater awareness of how his attitudes affected Lavinia’s self-worth. It was beautiful to watch them both navigate their own flaws and come to wholeheartedly accept each other. All of each other.

I also think Lavinia speaks to an important but often less emphasized aspect of feminism. There’s this understanding we all have that that which is “traditionally feminine” is inherently trivial. Fashion. Makeup. Romance novels. This unadulterated crap. We should be fighting for the legitimacy of so-called  “traditional femininity” every bit as hard as we are fighting to right to pursue “traditionally masculine” avenues that are so often discouraged for us.  You like spectacular clothes? Get it, girl. Are you a master makeup artist with an Insta account that would blow us all away? Get that, too. You want to be the first human on Mars? Solve the energy crises? Be elected POTUS? Get it, get it, get it. None of these things are mutually exclusive, ladies.

It’s not every romance novel that expertly weaves these complicated contemporary issues so effortlessly into the story. This is why Eloisa is so fantastic. She doesn’t beat us over the head with anything. But it’s there. What’s also there? Hot, steamy kisses in the rain. Palpable sexual tension that reverberates off the pages and into your skin. Born to be Wilde has everything. All the emotions. All the good, connected sex. And OMG the fashion! Beautiful, to die for fashion…

Definitely make some time for Born to be Wilde, friends. Definitely, definitely.

Review: The Highwayman by Kerrigan Byrne

Review: How to Hack a Heartbreak by Kristin Rockaway

Review: The Unhoneymooners by Christina Lauren